The way a chicken behaves daily changes, DAILY. Truthfully, the same joyous happy hen today, can be a pain in the ass the next day. I don’t even know why, but they do swap moods frequently.

For instance: Thelma, a normally standoffish New Hampshire Red loves me to scratch her waddle but if I go to pick her up, she’s not happy about it. Now, all of a sudden she’s following me around talking to me as I do chores in the pen, begging me to pick her up (Go figure)… She’s a three year old now. 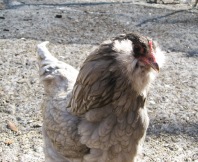 Then another hen, Victoria; a blue Ameraucana. She’s a babe and my sweetie, but let me tell you, she has a mood. When a hen molts, they get very angry if you want to pick them up. I mean heck, I likely would feel the same if 70% of my feathers were off my body and I had these little stick-like quills poking me,  pressing into my body, when someone picks me up. OUCH!!  That has to hurt.  You think that the mood would pass after the molt passes, but nope; it does not. Until their hormones return to normal and they get the urge to lay again, you can pretty much forget any loving feelings they might have toward you. During this molt, she eyed me suspiciously and ran every time I wanted to kiss her little chicken face.  Poop! What a downer.

irley, my LOUD MOUTH New Hampshire Red, has become a love bug. She’s never been overly affectionate but she’s sure the one to watch. She likes being picked up and nuzzled. That’s another one I couldn’t have called. She has been a real pain in the butt, up till now.

I could go on an on, with each hen getting rated on behavior, but really, most of them have changed significantly. I don’t really know why. When I sat and thought about it, I realized that most of my ladies are three years old this year.  There must be some maturation which occurs in the three-year old category, which just makes them more likable.  Then again, maybe they just like me more after three years.  Ha! I’ll never know…

With all my pondering on this subject, I find few facts. I just go on personality and habit. How they act, as opposed to how they acted last week or month or year. Victoria is in a very cordial mood this year, so far. She’s not molting and she must feel good. All she wants is for me to carry her around and talk to her. I’m not going to get too secure with this, because I know that next week or even as soon as tomorrow, it can all change.

I can’t even get into discussing why now, Cleo (A Cuckoo Maran) thinks I’m demon spawn…

She runs from me like I tried to make her my dinner. I did not!!  I can’t convince her that I’m a nice lady. What change after her molt, I can’t fathom either. She was such a sweet girl, but now she’s not a happy camper. Although, I don’t miss her trying to eat my freckles…

No this is not Cleo. She wouldn’t be still for a pix!

Anyway, I really wanted you to get an idea that you can’t buy a chicken breed and think you will have the perfect hen. They change personalities like the wind. You can buy the type you ‘think’ you might like most, then spend a mega amount of time with that bird, from baby to adult, so it gets use to human contact, and hope it comes out nice and docile.

None of my birds peck. OK, just one (come to think of it). That’s a Barred Rock hen who I got from a 4-H youth as an adult hen. She never had any personality but she lays like crazy, so I  kept her. However, none of the others peck. They are all cool and if they don’t want me to pick them up, they just struggle to get down. I get that… I would too. Most of them tolerate my desire to kiss their face, and nuzzle their neck (and likely, hug a bit too much). I can’t help it…

A lot of new backyard chicken keeping folks, get frustrated when the hen they have turns out to be a scratching pack of feathers and a beak. This ideal bird, which is pictured in the youtube videos and the photos of children holding them, you see in the web, has been cultivated and nurtured. The Natural behavior of a chicken is to run like hell from humans or anything else.

So, in closing. If your child or yourself decide on a chicken. Spend time finding out what you like, then also what is a good fit for your family. Then spend time talking to folks about chicken breeds. Decide to spend a goodly amount of time with that chicken from the time they hit the door. … By The Way, They Poop. Get over it…

Yes, I’ll answer your questions if you have any! I’d be happy too!

Tagged Deciding on what type of chicken to purchase, Hens Personality, life with chickens, taming a chicken