When one has a blog of any type, it’s sometimes difficult to find things to write about. You, as would-be blogger, have to run around with a camera, documenting things of interest and what’s happening as it happens.

That’s not my strong point OK?  I mean the running around with a camera stuff. I do take photos of things chicken related, but lately they have been on the Macabre; and frankly disgustingly un-bloggable subject lines.  “What?” you may ask.  Well, Just various dead things. I’m stunned at the ability chickens have to kill almost any other small animal they don’t like having around.

On the list of dead things I’ve found lately; Two baby mice, An Adult Mouse, A Rat, A Cardinal,  A Squirrel! Well, I think it was a squirrel. All I found left over was the skull, so that might actually be up for questioning. However, the chickens aren’t discussing it with me so we’ll have to call it a squirrel.  The Cardinal is also a guess. I found a skull in the chicken yard. I do know birds pretty well though, and this skull had a reddish beak and the shape was right.

Of the dead rat, I did take a photo of and it’s posted here on a recent story, called “The Eradicator” (It’s over on the side bar if you want to read it)  (/2012/07/18/the-eradicator).  There wasn’t much left of the other animals and frankly I almost lost my lunch carrying the remains out to the trash so you can forget the photo. I do have a picture of the skull, mostly because it was neat; albeit a bit disgusting but still neat.  It had to have been in there a long time because it was dirt encrusted and missing a lower jawbone. 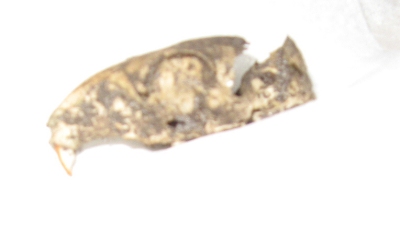 Going back to my story…  (Well, if this is actually a story. I’m thinking it’s more of a body count).

If there were ever an argument for chickens being evolved meat-eating dinosaurs, then I’d say this evidence supports that hypothesis. As they are running across my yard snipping and snapping at whatever is dangling from the mouth of the chicken being pursued – with said morsel, they look like a pack of velociraptor.

Having chickens has proven to be really enlightening, enriching and a little frightening. I wonder what would happen if I passed out on some hot afternoon while raking up bird poop and shavings?  Would the tables be turned and I end up being an Avian Feast?

I’ll leave you with that little image stuck in your head…. 🙂

This entry was posted in Life With Chickens. Bookmark the permalink.

2 responses to “Macabre Questions for Chickens”