It can be really weird thinking of all the observations you make in dealing with Chickens on a day-to-day basis.  Here is a small list of my every day observations, before the day even warms up and makes it to Afternoon.

Waking up and throwing on my coat, and heading outside, I walk up to the chicken yard. I notice a few birds missing at the gate. Usually, there are about 30 happy and LOUD birds all wanting out of the 50 ft enclosure they have to reside in after sundown. With the Gait shut they are safe from predators (Well, most predators).

As I go in for further inspection, I see eight birds on the nest.  Some nests have more than one head popping out. They do fight to put all the eggs in one nest. I suppose that’s where the saying “Don’t put all your eggs in one nest” came from.  It’s a chicken fact! They do!

OK with that mystery solved, that totals the head-count to 100%.

Now for the poop… You may think poop has no place in chickens health, but it’s pretty darn important. Like who is pooping loose and who isn’t. Who is spraying the walls of the chicken coop with mess and if that bird is doing alright. I’m a real butt checker.

Messy pants can indicate a problem bird. If I find someone with perpetually messy pants, I segregate them into a sick pen.

It seems birds get “G.I.” problems fairly often. What I find is that if you give them cottage cheese and capsules of Acidophilus probiotic, they tend to get well fast.

Now birds do get loose stool from time to time and it has nothing to do with a bad intestinal situation. Sometimes they just ate something disagreeable.  It passes and they are fine. This is where the “watching” comes into play.

Birds sleep in the same spot every night. It’s funny watching them argue over who gets to ‘move over’ when they head to the roost. Now if the arguing gets too bad, I step in and give the offending party a guiding tap with a long dowel rod. Usually this is not even necessary. They do know what the stick is for.

With their penchant for sitting in the same spot over and over nightly, its easy to pick out the one with the problem, if you can’t see it on their bottoms, it’s on the wall behind them or its in a very disgusting pile under them.

All clear in the fanny department…

This is a happy Rump… 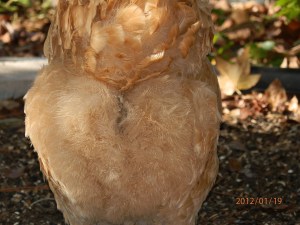 Now for food. There are three food pans. Each pan gets a new load of laying crumbles. They are really excited about food. Even if they are full as can be, they still run for food; kind of like a kid to a ice-cream truck. Even now, I’m looking to see if the pan has been pecked clean or if they are leaving the food behind, which can indicate I’m over feeding; which I am very prone to do. You might think that over feeding is alright, but it isn’t.

When a flock of birds is over fed, it encourages pests to come and eat the remaining food overnight. Pests can be, anything from Possums to Mice and everything else in between. Why is this a problem? Well, food source follows food sources.  Rats or Mice eat food, in turn Owls eat Rats and Mice, who in turn bring in other predator birds for the day time forage. Not only that, but other animals drawn to the extra food will also bring disease. It’s not a Win-Win situation for the birds or humans.

A pan of food should be totally eaten by Sun-Down.

Onto Watering the birds.  The pans get pretty dirty. What the birds don’t dribble down into the basin they kick in, dirt-wise. Chickens are just messy animals. The water basins are bleached out once a week and scrubbed with a soft brush, then washed thoroughly. Usually this is a weekend job and I’ve not done it yet. It’s raining today… So, that’ll be later.

After all of this is done, I usually make the rounds in the yard, checking the fence line. Nothing is down or messed up.

We use plastic deer fencing. It can tear or get ripped but seldom does. Usually there is no problem other than a small droopy spot, from a squirrel hopping on it and jumping to a nearby tree. After a week or so of the momentum, the fence can sag a little. I hoist it back into place and secure it. And all the while chickens are around my feet hoping I kick up a bug or other yummy object.

Now onto the nesting area. I try not to bug them while they are on the nest, so I wait till most of them are doing other things. They accept me as part of their day-to-day adventure, so, for the most part I’m ignored.

The nests stay pretty clean. There occasionally is a weak egg that gets busted and causes a foul stink (Once the afternoon heat gets to it).  They also get everything really dirty and wet. The squished egg will dirty the other eggs, and if the mess sticks to the underside of the hen sitting on the other eggs, their belly gets gooey. I hate washing chickens…

I almost always separate eggs apart into different nests. For several reasons. Chickens like to lay an egg where they already have a stock pile. I don’t know why. I am not a chicken-EGG-spert. However, if too many get in one nest, they almost always get too rambunctious and break one or two. Then they eat it. Not an activity to encourage. My G-Grandmother use to say, “A egg eating Hen becomes dinner”…

Once a week they get new hay in the nesting boxes.

Then once a week I put in new shavings in the coop area. Old Poop Out, New Shavings IN!   OK, so it’s a lot of work but it keeps them healthy and they give me great eggs…

If my little recount of daily and weekly Chicken Events has not totally discouraged you from having chickens of your own, let me tell you. It is a lot of work, but the rewards are heartfelt. When you just love your birds, it’s worth it.

This entry was posted in Chicken Care. Bookmark the permalink.

2 responses to “A Happy Butt”